Barry, Josie, Francis and Mary and their care companions, including Linden House’s Activities Leader, Mandy, shared conversations with myself and Chris, the project’s resident poet, over three consecutive sessions this week.

Our programme of activities began with a trip to the Shoreline’s exhibition on Saturday afternoon, where our participants met myself and Chris for the first time. The afternoon was an informal, relaxed exploration of the gallery and an opportunity to spend time with each participant in turn. Together we focused on a few key pieces which they responded too with the most enthusiasm.

For Barry, this was Morland’s The Wreckers, a dramatic scene of a ship wreck lit momentarily by a parting in the dark, stormy clouds above. The scene reveals local men with horse and cart risking their lives to pull to shore the spoils of a ‘dead wreck’. In the far bottom, left hand corner, two corpses are laid out on the rocks, possibly members of the ship’s crew or wreckers who have met their fate.

During their conversation, Chris recorded the narrative  they began to build up through an analysis of the painting and what it represented to Barry. Together they have used this descriptive account to develop a poem which captures beautifully the energy and drama of the scene. This poem can be be ready here.

For some participants, using language to express their responses and describe their observations of a painting, on the day, was more challenging. What was observed however, by the companions and ourselves, was an increase in speech by Mary and Josie which may not have always been focused on the artwork but was attributed positively to the stimulus around them.

I was interested to see how Josie’s companion, Fiona, took her back to the same three pieces as a way of helping her recognition of the images. Fiona explained that stopping to look and talk about too many artworks would not help Josie to focus and respond, so she identified three paintings that Josie seemed to I respond to and took her accompanied her back to them from time from time. One of these paintings was Spencer Gore’s   ‘Brighton Pier’. Josie’s poem inspired by this is artwork can be read here.

Similarly, Mary also struggled on the day to share her responses to the artwork or engage fully within a two way conversation. However, her responses were captured by Chris and have become her beautiful poem, which can be read here.

The focus for the conversation between Francis and Chris was Kurt Jackson’s ‘Eighty  Mile an Hour Gales over the Crowns’, 2011 and Dame Laura Knight’s ‘Mousehole’.

Although figures are absent in Jackson’s painting and it lacks immediate narrative, I was surprised to hear from Chris the number of varied descriptive elements Francis drew from this seascape. These seemed to stem from her recognition of two figures in the rocks looking out to sea, and through a process of questioning as to who these figures might be and what are they doing there, Francis, who we later learnt from her daughter, loves the sea and loved swimming in it as a child, identified them as Mother and Daughter. You can read Francis’ poem here, and her poem inspired by ‘Mousehole’ can be read here.

To compliment and follow up the groups visit to Shorelines, Chris and I visited Barry, Mary, Francis and Josie at their care setting. This was an opportunity to create more tactile and sensory engagement opportunities, and provided Chris with the opportunity to share their poems and make any amendments that the participants requested. 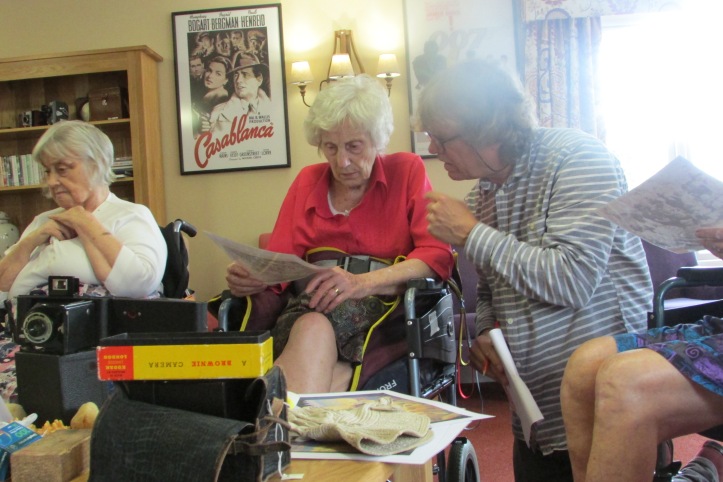 Activities included handling and talking around replica objects and artifacts from the museum that linked to some of the paintings they saw in the exhibition, as well as sharing images from the museum’s photographic collection. These images are of local coastal scenes and span around 50 years from c1910. Through looking at these images we chatted about how people’s clothing and behavior changed at the seaside over this time and the kind of things we enjoyed doing on holiday.

In response to Barry’s enthusiasm for painting, we also brought in some watercolors and oil pastels for an open ended art making session inspired be the artwork in the exhibition. This was an opportunity for me to experience facilitating art making in a care setting for the first time. For some participants this was very challenging and the communal environment the art making took place in, for some, added to this.

The art making was a mixture of responses from drawing straight from images of artwork that we brought in, to creating new pieces.

Barry responded by working closely with me to realise an image that he formed in response to Percival Wise’s ‘Punch and Judy on Swanage Beach’, and our conversations about seaside holidays in the past. Through describing for me the features and elements of the picture I was able to draw the scene as he saw it. He also helped me understand more about the qualities of watercolours by guiding me in terms of the techniques required to create his desired effects. Although Barry’s mark making ability was limited on the day, his creativity and imagination wasn’t and he shared with me his insight into what he thought people might read from the scene, highlighting the juxtaposition of the ‘dead, leafless’ tree in the far background against the joyful and childlike motifs represented by Punch and icecream.

Some of the comments Mandy, Linden House’s Activities Leader, shared with us after these sessions included:

You’ve made me look at art differently. I’v learnt how to get the best out of people when we look at art.

Barry talked about it a lot when he got back. He really enjoyed it.

Going forward our next steps are to work with residents at Kingfishers Dementia Specialist Care Home in New Milton, which I will update on soon. We will also be inviting Barry, Josie, Francis and Mary and their families back to the museum later in the year to present them with a published anthology of poetry from the project, which their work will form part of.